Everybody shake your stuff! Nigel's DID CJ You know I'm going to be gutted when this CJ is over, I've had so much fun with it!  I only have Sonja's still to do and then that's my lot :(

As he's currently recuperating, I doubt he will be doing much breakdancing at the moment! but I hope that this spread reminds him of fun times at the forces discos :)

My string of luck continues this month, and despite there only being two songs left to choose from on Nigel's list, the one I really wanted right from the start was still available - Street Tuff by Double Trouble and the Rebel MC - love this choooooon! :) 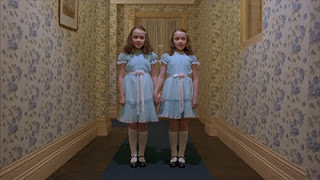 So I started with the concept of "double trouble", I was thinking evil twins a la the Shining:

So I went about cutting a 5"square 4-layer stencil of Ronnie and Reggie..... what was I thinking??? It took ages and gave me a finger blister!

Here are the 4 layers cut out:

Fiddly little so and sos! 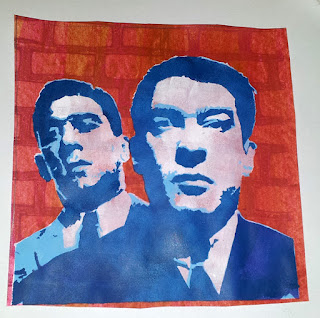 And here it is part used, this is layers 1, 2 and 3 before the final black layer goes on:

And here's the end result: 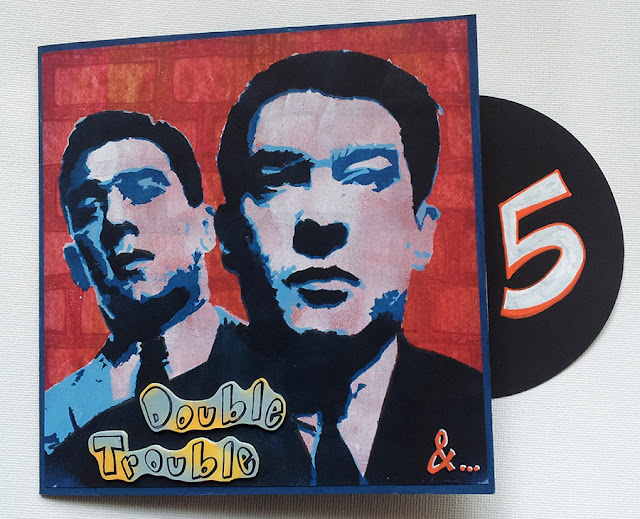 I do like the way it turned out but it was a lot of work!  I need to find some other use for that Krays stencil now :D

For the inside spread I wanted breakdancers, so I cut some masks out from copier paper, being sure to cut them in one piece so I could use both the positive and negative parts of the stencil: 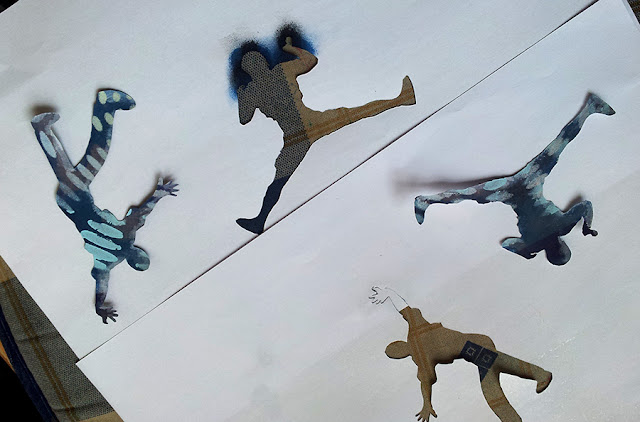 And then I took inspiration from something I had seen Andy Skinner do in one of his videos, to create my little "disco" scene using the gelli plate: 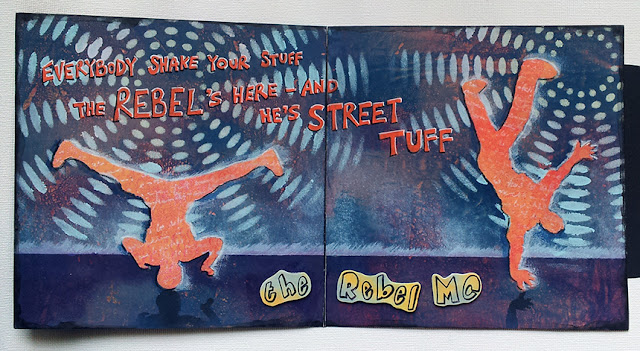 and that's about it, other than my sign in bit on the back: 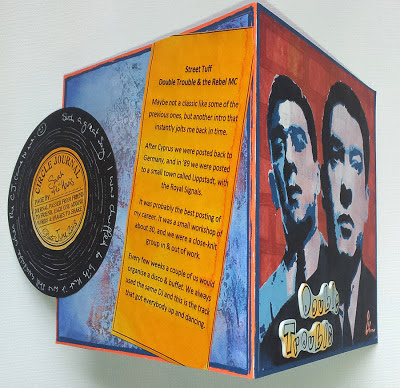 From that angle you can see the "double trouble" is dimensional - the little title tiles were made using shrink plastic, as I wanted to use these graffiti bubble writing style alphabet stamps, they have a very old school hip hop feel to them, but they were way too big. 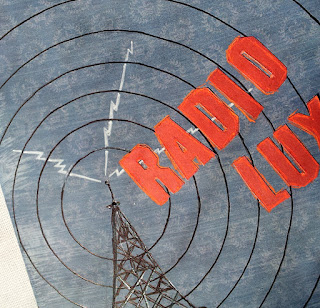 After finishing my own entry I did have a good look through the others to see if any of them cried out for the collaboration treatment - but most have already been added to quite a lot.  So all I did was add a couple of bolts of electricity coming out of the cool pylon/transmitter on Virginia's Queen page:

And then I called it a day.

Collabor-ART is a lightly juried European online community which was founded to facilitate collaborative mixed media art projects.
The scope of these collaborations range from direct 1-to-1 swaps and co-productions up to large round robins.
Anybody can apply to be a part of the community - please see the FAQ for details